Introduction
You believe it or not, but we consume boron containing compound almost every day. For the safety storage of rice, it is sprinkled with boric acid (H3BO3). Therefore, I personally would suggest washing rice multiple times before its consumption. How boron exists in nature? In nature it exists as a 'Tincal' which is a crude form of borax. Various boron containing compounds can be obtained from the borax. Borax, its preparation and reactions are discussed below.

Reactions of Borax
Boric acid can be prepared by the hydrochloric acid to hot saturated borax solution until the solution becomes strongly acidic.

Boron (Symbol:B) stands first in group 13 with atomic no. 5. It is found in nature in the form of Borax.

Pure Boron
Pure boron is prepared by passing mixture of hydrogen
(H2) and boron tribomide (BBr3) gas over an electrically heated tantalum filament. Boron generally reacts with many metals to form borides. In case of pure boron preparation, the temperature of tantalum filament is maintained between in 600-1600⁰ to avoid reaction between tantalum and boron. Tantalum reacts with boron above 1800⁰ (refer Fig 1).
Pure crystalline boron is black and has great metallic lustre and opacity. The electric properties of pure crystalline boron match with the semi-metals.

Moissan’s Boron
Moissan’s boron is impure boron with 98% purity. It can be prepared mostly in two ways either by the reaction of potassium fluoroborate or boric oxide with metals (refer Fig 2). Moissan's boron is also called as impure boron since it is difficult to get pure boron by these methods.

Boron compounds
Boron reacts with various elements to form boron compounds; some of them are well tabulated in the following table (refer Table 1).

Boron halides and their Lewis acidity
The Lewis acidity is the tendency to accept electron. Boron compounds are known for their incomplete octet. Generally boron forms SP2 hybridization and has vacant 2P orbital which can accommodate electrons from any electron rich species/anion/ligand. The strength of Lewis acidity      depends upon the electron deficient nature of the boron in a given compound.
Among BF3, BBr3 and BI3 which has more Lewis acidity?
Among boron halides, since we know that fluorine is more electronegative, it will have more –I            effect.

Electro negativity trends in halogens: F >  Cl  >  Br > I
Usually anyone think that BF3 will be more acidic among others but this isn’t true.

Among BF3, BBr3 and BI3, boron has vacant 2P orbital and all these halogens acquire three lone pairs. Electron pairs in case of F, Br and I is present is 2p, 4P and 5P orbital respectively. In case of boron trihalides, electron pairs on halogens interact with vacant 2P orbital of boron. 2P-2P interaction stronger compared among others (2P-3P, 2P-4P, 2P-5P) since orbital from same shell have nearly same energy (See Fig 3).

In halogens, electron pairs on fluorine are in 2P orbital and hence make the strongest interaction among all the halogens and strength of interaction decreases from fluorine to iodine. The strong interaction of fluorine leads to the formation of partial bond between them. This interaction is also called as back bonding or pπ-pπbonding. More interaction with electron pairs from halogens decreases the electrophilic nature of boron. Therefore BF3 is least Lewis acidic.
Order of Lewis acidity
BI3   >   BCl3   >   BBr3   > BF3

Frustrated Lewis Acid-Base pairs
When any Lewis acid comes in contact with Lewis base, it forms Lewis acid-base adducts. Its classical example is well depicted below (Fig. 4).

Imagine the Lewis acid in which boron atoms is attached with three bulky groups (say phenyl) and Lewis base (phosphine) also bearing large groups. On mixing of such Lewis acid and base, though there is presence of lone pair (of lewis base) and vacant orbital (of lewis acid), because of presence of bulky groups, they can’t form adduct and it creates frustration among the molecules. Such Lewis acid-base pairs are called as Frustrated Lewis a acid-base pair which is well represented below (Fig. 5). 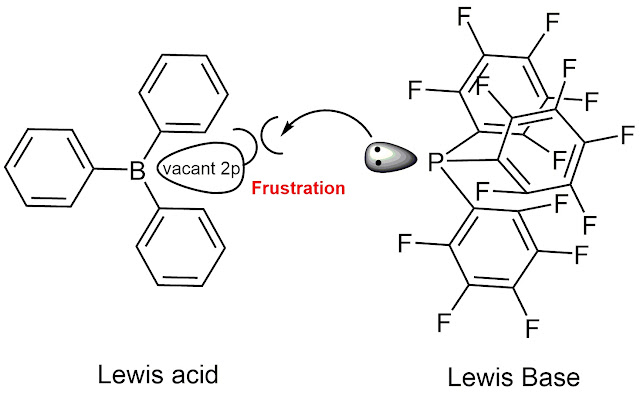 Doug Stephan from McMaster University, explored the reactivity of main group systems, queried the impact of systems in which Lewis acid and Lewis base functions were incorporated into the same molecule and sterically prevented from quenching each other.
This frustration has several other applications in organic chemistry. One of the application is the breaking of hydrogen molecule in presence of this frustrated Lewis acid base pairs and followed by hydrogenation of various substrates.
(Reference: Angew. Chem. Int. Ed. 2010, 49, 46–76.)

Boric acid: Monobasic, dibasic, tribasic?????
Boric acid (B(OH)3) has three hydroxyl (-OH) groups in its structure. Though it seems to have three protons directly attached to oxygen atom, it is not tribasic acid. Actually boric acid is monobasic acid i.e. it gives only one proton or one mole of boric acid neutralizes one mole of mono acidic base. In reality boron never donates its own proton.
Then how boric acid is monobasic acid?
Boric acid shows unusual breakdown of water molecule when dissolved in it. Typically boric acid breaks the water molecule to form [B(OH)4]- and proton (responsible for acidity).

Diborane (B2H6)
It is expected that reduction of boron halide to produce borane (BH3). However, it is quite difficult to isolate the monomer. All the reported syntheses result in the formation of diborane (B2H6). Few reactions of diborane synthesis are shown below.
(Exception: Trimethylboron doesn’t show tendency to dimerize alike BH3.)
Reactions:

Diborane is the simplest boron hydride and falls in class of electron deficient compounds.
Diboranes are good reducing agents and show no tendency to accept electrons from other reducing agents. After synthesis of diborane, it took almost thirty years to predict its exact structure. In case of diborane, each boron atom undergoes SP3 hybridization which forms four hybrid orbital having three unpaired electron and one vacant orbital. Two BH3 molecules form bond between them by 3c-2e bond which is also known as banana bonding. Specifically, vacant orbital of one boron, orbital with unpaired electron from another boron atom and S orbital of hydrogen atom overlap to form new molecular orbital i.e. 3c-2e bond (Fig.6). 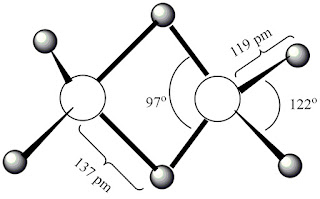 Professor Lipscomb for his work in borane chemistry was awarded with Noble Prize in 1976.

(Tip: This blog is especially written for undergraduate students)

Popular posts from this blog

February 28, 2019
While taking group photographs in conferences, seminars, workshops, etc. Indian chemists and researchers prefer to say ‘benzene’....instead old one ‘cheese’ to make happy faces. But what do we know about benzene? As a chemist do we really know the struggle faced by the researchers to derive its structure? Who discovered benzene? Who synthesized benzene for the first time?I hope this blog will be quite useful for those who are willing to know the answers of the above mentioned questions.
Benzene What we know today about benzene? Benzene is a colourless organic flammable liquid with characteristic odour which boils and freezes at 80.1 and 5.5 °C respectively. It is immiscible with water and has low density than it (water). The molecular formula of benzene is C6H6 where all the C-C and C-H bonds are of equal length. Benzene is a planar aromatic molecule where all carbon atoms are SP2 hybridized. The aromatic nature can be evidenced from its NMR spectrum. In UV-visible spectroscopic analys…
6 comments
Read more
January 17, 2017
BAEYER STRAIN THEORY AND STRAIN
Anand S. Burange, Wilson College, Mumbai asgburange@gmail.com. Small rings like cyclopropane and cyclobutane have larger values of heat of combustion per –CH2- group compared to other larger rings. The answer to this observation lies in a theory proposed by Adolf Von Baeyer from University of Munich in 1885. His theory is also known as Baeyer’s Strain Theory but all the aspects discussed in theory are not completely accepted as some of them were proven wrong in the course of history. Now a days this theory, is modernized and then discussed for the better understanding of students/researchers. Baeyer’s Strain Theory Assumptions: Baeyer in his theory, he did few arguments where he failed to convince many aspects while some of them are well accepted. Few important arguments from his theory are as follows.